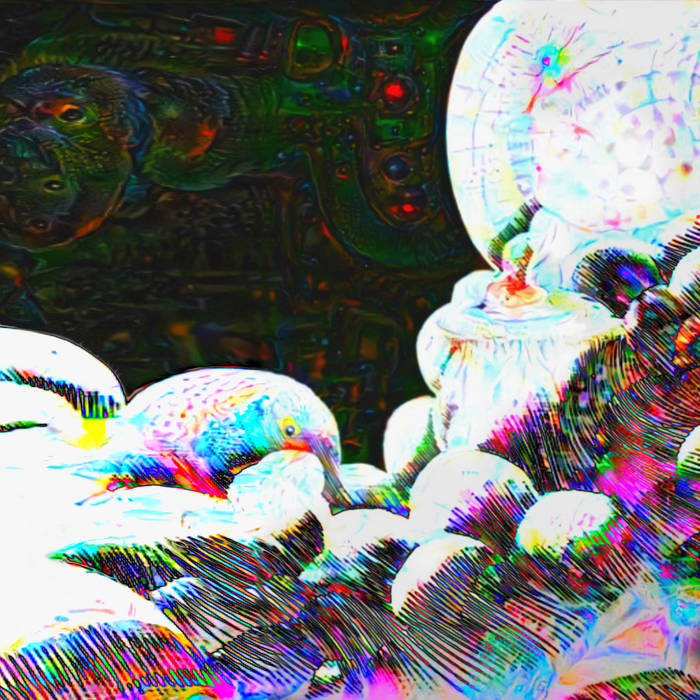 josh moss "...a trustable cloud" hit my ears like a ton of bricks, sounding at once completely novel and also familiar. hard to categorize but beautiful and challenging music made with web browser instruments...highly recommended Favorite track: cloud 1.

Aeromancy about the future of life on Earth.

All of the sounds on this album were made with free online instruments and effects processing that are playable within internet browsers.
Some of these browser-based instruments are replications of instruments that exist offline, such as drum machines, synths, or mouse-click playable versions of Harry Partch’s instruments. Some are mere toys or curiosities, seemingly meant to be a brief distraction.
Some seem to be intended to provide background sound for studying, sleeping or whatever.
Some seem to aspire to be deep, useable sound tools, and have varying degrees of success.
Not many of them are truly unpredictable, most have a very prescriptivist, on-rails experience - they expect things to go a very particular way. I tried to both acknowledge that and subvert it, leading to a project that shows a tension between the intent of the online instrument and my own screwy aesthetic.

A special shout-out should go to the website I used the most on this project. Called “Voice Changer”, the site appears to have been intended to apply effects to people’s voices, possibly for gag uses, maybe for Halloween or something. Each of the site’s different effects is represented by a cryptic little image rather than a description. Applying effects to the things I recorded from other websites really extended the sound palette tremendously.

I had originally intended to do edits, multitracking and finishing through internet browsers as well, but the implementations of these processes online were so flaky that I had to abandon that aim, and use my standbys Amadeus, Cubase and T-Racks.

The download of this album comes with a Word doc full of URLs for all the websites I used (and some I didn't use) to make the sounds for this album.

I was going to say something here about trust, but given my current levels of trust in humanity's ability to form just societies, or to save itself from certain doom if that means certain people and their heirs will not be able to hoard resources anymore -- perhaps I will leave it unsaid, and instead talk about clouds.
I am fascinated with clouds, and for me they have come to have a complex symbology. I was fixated on the giant storms of Jupiter even before NASA’s Juno space probe began to send back such astounding imagery. I had begun to think of the 2016 election and the rise of fascism embodied in Donald Trump as a kind of a violent, indeterminate red storm, out of the control of anyone, least of all the fascists themselves. (This is referenced in the title of one of my earlier pieces “Red Whorl” from Pairs of Opposites Imply Unity.) There is also the dubious adoption of the word "cloud" to describe internet storage. It kind of conceptualizes a nebulous, heavenly “place” where everything that matters to you is supposed to be safely kept. Seems inevitable that this technology precipitated the appearance of nonbelievers who exclaim “don’t trust the cloud!” I can't neglect to mention the actual clouds in the sky, or the implications of a changing climate and what that means for life on this planet. I recently read something about how climate change is going to make clouds disappear, and life on Earth is fucked without clouds. Life is weather.

This is Utopian music about clouds and trust.

Coloradan C. Reider’s been around for a long damn time, releasing all kinds of experimental music since the 1990s and overseeing his label Vuzh Music. On “… A Trustable Cloud,” Reider utilized only “sounds … made with free online instruments and effects processing that are playable within internet browsers,” a limitation that sounds fraught and whose results could very easily be laughably incoherent in the wrong hands. But Reider’s hands are not the wrong ones, and “… A Trustable Cloud” bursts into an experimental downpour of joyous weirdness. It’s not all samples of the Windows startup noise or the Taco Bell bell. Clearly I had no idea what to expect.

The tape is broken up into four long tracks on Bandcamp, but on tape it’s essentially one continuous piece, shifting in and out of tone and mood at will. At times resembling downtempo IDM and computer techno, Reider has enough Aphex Twin tricks up his sleeve to generate comparisons. But he also injects this thing with odd vocal tics and text-to-speech voices, as well as goofy sounds and washes of static and noise, that it really takes on an identity of its own. It’s like he’s been listening to some stupid outsider podcast or something and getting ideas, but actually using them in appropriate and artistic ways, not just triggering farts in the middle of a particularly introspective passage. (And yes, there are actually appropriate utilizations of certain technology. It’s not all just a joke.)

Toggling between concepts of actual, moisture-filled objects in the sky and the online repository where “everything that matters to you is supposed to be safely kept,” Reider also toggles between playfulness and seriousness, coming out on the side of imagination-as-a-way-forward. In this collection of “Utopian music about clouds and trust,” you might think it’d be easy to get bogged down in the heaviness of concept, but fortunately Reider is adept enough at navigating all the sounds he’s placed at his disposal that “… A Trustable Cloud” is as strikingly buoyant as its title would suggest, yet often dark and stormy as it’s wont to become. It’s a heckuva ride, and it’s definitely something you can place your faith in to kickstart that brain of yours into flights of fancy.