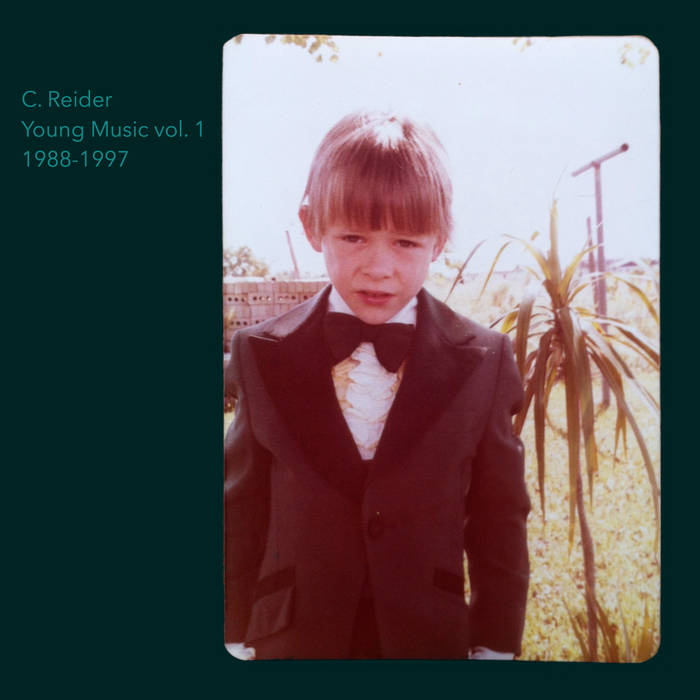 This first volume of collected early works spans the years 1988 to 1997, from when I was sixteen to twenty-six years old. It spans a period of time when I used many different ways to record music: first by borrowing equipment from friends, or by layering sounds by bouncing from one tape player to another - to a Fostex 4-track recorder - to an early hard-disk recorder, the Roland VS-880 - before I finally started doing work on computer (none of which you’ll hear on volume I, but there’s a smidge of it on volume II). Herein I explore a lot of areas of interest that I no longer find interesting, so there may be some novelty at that material, but there’s a surprisingly cogent expression of ideas I still use today on some material. This was a time when I had very little clarity on what I actually wanted to explore in music, and correspondingly, a lot of the stuff now is a little embarrassing to one degree or another. I can look past it because I know that I was really into what I was doing then, and I can hear myself fumbling awkwardly toward some of the things I'm doing now. Maybe in another twenty years I'll look back on my current stuff with some embarrassment, who knows? Most of the tracks on Young Music vol. 1 feature the guitar, an instrument I relied on during my early years, but have since all but abandoned. All of this is lo-fi as fuck, much of it goes on for too long, and some of it may annoy. I fought the urge to completely remix and edit this material. Instead, all tracks are derived directly from mixes I made (either to tape or DAT) at or near the time I originally recorded the stuff.

Untitled
I remember that I specifically wanted to do a one minute long track, although I can’t recall if it was for a compilation or if it was just something I wanted to do. I remember wanting as much variety as I could do in a non-melodic track, so there’s three separate sections of different kinds of feedback and guitar thrashing. I can’t remember much more about this piece, except that I used to like it a lot more than I do now.
Recorded on 4-track on February 9, 1994 using guitar and feedback.

Wail
Recorded the day after the above track! I think the 4-track was newly in my possession at this point, but all the other equipment I had was my guitar and amp, a delay pedal, a little radio shack microphone and a radio, so I did a fair bit of stuff with that, trying to get different kinds of sounds out of the same equipment.
Recorded on 4-track on February 10, 1994, using guitar and radio (possibly amplified into some resonant vessel and mic-ed with cheap 1970s Radio Shack mic)

Hammer to Mirror
Most of this was recorded in 1988 at my High School friend Eric Isbell’s house, using his 4-track and drums and synth and mics and effects. (Eric has been half of Denver industrial band Black Cell for ages now). Later I added some stuff to the original 4-track recording: sounds like there's a tape loop, but I'm not sure what the source is. There's definitely some sounds from my first tape player that started making a weird grinding / creaking sound as it got old. This track was originally recorded as part of my “industrial” music phase, I guess: the original recording had bad Skinny Puppy like vocals, ha. Hammer to Mirror and the two that precede it (Wail and Untitled) were originally released on some versions of my first solo tape “Not Named”, which has been out of print for a very, very long time.
Recorded on 4-track 1988, and added to on 4-track in 1992. Instruments include synth (unknown make), drums, voice, tape loop.

OnidrevOgitrev
I did a project of bad progressive metal. Most of it’s unlistenable, and so I’ll never re-release it. I’m not even gonna name it here ‘cause I’d rather not generate any interest in it at all. I do like this little instrumental, which is a backwards version of another instrumental called Vertigo in Green.
Recorded to 4-track 1996, using guitar.

Primera Alma
This was from a project called “Altered Statements” in which the tactic was to remix sounds from the movie Altered States. It was released as a split tape with Static Insect in 1998. I had wanted to do a longer term project where people remix sounds from a bunch of different movies, so the choice of movie wasn't all that important to me, and so I let Kevin Paisley from Static Insect decide which movie to do for this one. Altered States is kind of an okay flick, but not what I really would've chosen if I'd been the one who picked the movie. This project was one of the first things I did on the VS-880 (early digital 8-track), and I can hear a lot more thoughtful processing of sounds and more complex arranging than the earlier 4-track stuff. The digital editing features of the VS-880 really helped me find my sound. There were three okay pieces by me on the Altered Statements tape, but I don’t really like the rest of my tracks on it, and I certainly don’t intend to re-release it. There will, however, be two more tracks from "Altered Statements" on Young Music Volume II.
Recorded to digital 8-track in 1997, using solely samples from the movie Altered States.

Slow Seed Part Two
The Slow Seed project was three long tracks of improvised sounds. I believe it was the first project I worked on with the new digital 8-track recorder, the VS-880. I didn't end up releasing any of it at the time because I wasn’t happy with the sound quality. After several years away from the material, I eventually released Slow Seed Part One on an album called Abandon (c-reider.bandcamp.com/album/abandon ), which was a catch-all album of re-mixed older stuff that hadn’t yet been released. This is the first time Slow Seed Part Two has been released on anything. Part Three, which has also never been heard before, will appear on Young Music Volume II. In my notes to Abandon I recollect that my mixes were plagued by a strange distortion, which I later attributed to incorrect bit rates being used when recording to the new digital recorder… but now I don’t hear much of that kind of dithering noise. While going through my tape archive, I found about 5 or 6 different mixdowns of this project, and I honestly just picked one at random to clean up for this release. The mix had a ton of hiss and some other problems which were cleaned up pretty easily, but no worse than anything else on this compilation, honestly. Funny that some of the recording problems that gave me so much trouble in my early years are so easily addressed now.
Side note: there was originally going to be a remix project for Slow Seed, and PBK completed a track for it, and it pretty well rules! His fantastic remix can be found on his Headmix album: www.discogs.com/PBK-Headmix/master/423933
Ian C. Stewart also completed an amazing remix, which I then re-remixed and that appears on the album Abandon (which I really recommend if you enjoy this older stuff: c-reider.bandcamp.com/album/abandon )
Recorded to digital 8-track in 1997. Instruments include drum machine, modified wire basket, dulcimer, nose flute, circuit bent electronics, vocal sample and lots and lots and lots of delay and reverb.

Ash Out
Recorded at my friend Erinn's house using his 4-track and bass. Erinn engineered and co-mixed this. It was originally released on “Not Named”
Recorded by Erinn Thorp to 4-track in 1991, using guitar, bass and vocal.

Brine
This was done before I had a 4-track, and so I acheived sound-on-sound by bouncing from one tape deck to another while recording new sounds in as well. I can’t specifically remember the set-up I used in order to mix previously recorded stuff and new material, but it probably involved lots of RCA y-shaped adaptors. A re-worked edit of this track appeared on 1998’s Abandon, but the full version originally appeared on some versions of “Not Named”.
Recorded to stereo tape on December 20, 1992, using radio, aluminum can, feedback and guitar.

Organic Machinery cycle 4
A collaboration with Eyelight, aka Jehn Cerron. I did guitar, and she added voice, radio and loops. I still quite like this track. It was originally released on a compilation I put together called “Linked Dreams of Lonely Moons”. We recorded four total tracks for this collaboration, the first two appear on “Abandon”. The third appears on Aughtet (c-reider.bandcamp.com/album/aughtet), but a different version will appear on volume II of this collection.
Recorded to 4-track by C. Reider and Jehn Cerron in 1995 using guitar, voice, radio and tape loops.