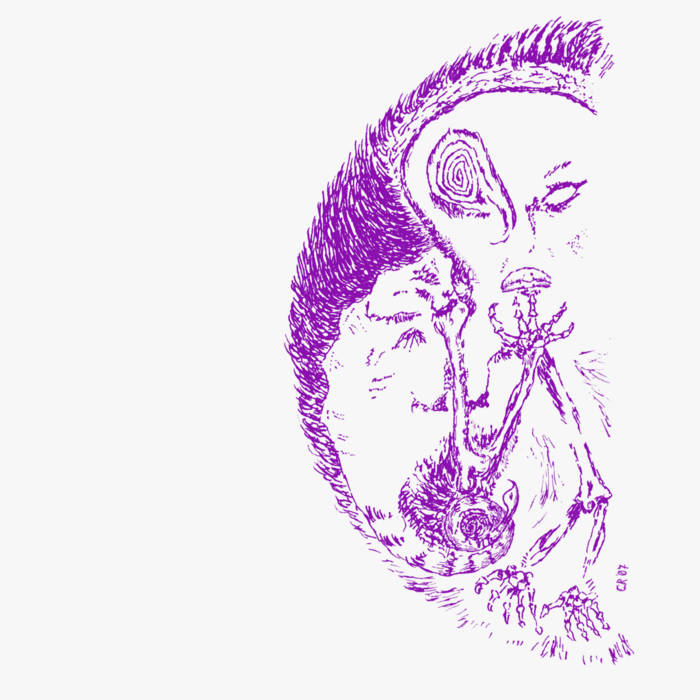 Drone Forest - "Amy's Arms / Metacollage" LP - This ultra-limited vinyl is the debut from a group of artists who exchange source material over the internet - so there's no 'band' to speak of, just individual composers adding their parts to create a cohesive whole. Consisting of two extended side-long pieces, there's plenty of experimental atmospheres and oddly surreal sound journeys here, none of which approach any semblance of conventional rhythm or melody. 'Amy's Arms' floats from haunting urban futurescapes to environmental ambience, and summons forth visions of a fantastic and colorful planet that is certainly not our own. When it all ended and the turntable stopped, I was sad to leave... Side B, titled 'Metacollage', is a similar experience, with diverse noises, drifty tones, and an almost-rainforest vibe that can be the perfect accompaniment for a quiet time at home or a trip to the outer realms. Noted ambient/psychedelia composer and Vuzh label owner C. Reider assembled these wonderful sound voyages from many hours of raw collaborations, many of which are available for free download at www.droneforest.com. So if you need a soundtrack to relax to, or just something to escape the mundanities of the working day with, this is a fine, fine release of unconventional sound that resounds with heart and soul. (Vuzh Music)


DRONE FOREST - AMY'S ARMS/METACOLLAGE (LP by Vuzh Music) In the dark days around christmas I was first introduced to the music of Drone Forest, which is 'a group of musicians who exchange raw sounds over the internet, then use those source sounds to individually construct music that adheres to a group ethic' (see Vital Weekly 558). 'Amy's Arms/Metacollage' is their first outing on vinyl, after a vast amount of CDRs. Currently there are four core members, Davie Blint, Mike Bowman, Ian C. Stewart (who founded Drone Forest in 2002) and C. Reider, the latter being responsible for the assembly of this LP and the release of it on his own Vuzh Music label. The recent CDR releases I reviewed were also assembled by Reider, so perhaps I am seeing only part of the four sided coin, but Drone Forest plays quite some interesting pieces of drone music. The music here is fifteen or so minutes per side of dark and highly atmospheric drone music, with a great emphasize on organ like sounds, many effects (perhaps a bit too many) and processed, through the same sound effects, recordings culled from nature. The longer piece approach applied here works well, better than the somewhat shorter pieces on the previous CDRs. Here music gets the time it needs to develop under the microscope. It's also somewhat louder and more present than much of the UK counterparts who work in a similar field (Monos, Ora). It makes this LP by far the better work I heard so far by Drone Forest, even when the music itself has no relatively new surprises to carry. (FdW)